Snow rabbits and nandina tree.They're real feeling of winter.  New Year greeting card with this kind of illustration is often used in Japan.

These kind of illustrations are also used for our New Year's card. They are believed to bring happiness.

This is"Otoso".
These three things ( Kagamimochi,Osechi.Otoso) are "Must" things when we celebrate new year in Japan.﻿
"Kagamimochi" is a large,round rice cake offered to the gods at New Year's.
"Osechi" is Japanese traditional New Year's cuisine.The box resembles bento box.
"Otoso" is sake. Otoso is drunk to flush away the previous year's maladies and to aspire to lead a long life.
Posted by Kumiko at 10:13 PM 2 comments: Links to this post 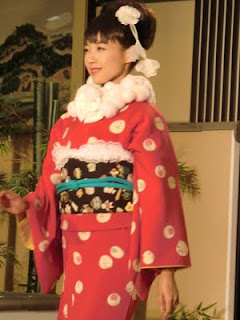 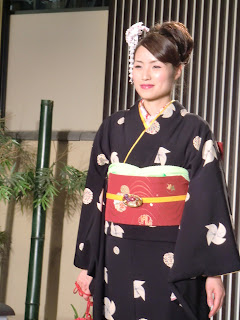 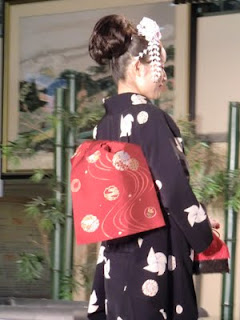 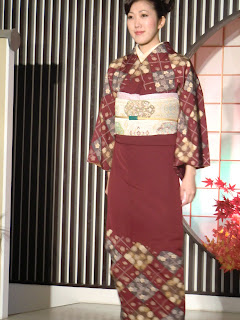 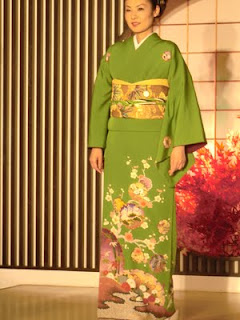 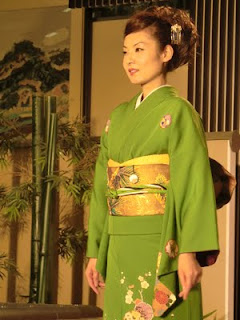 Good evening. I went to Kyoto today. There was a small Kimono Fashion Show at Kyoto Nishijin（西陣）Textile Center.（ My husband and I happend to be passing by the place when the show started.）
"Nishijin Weaving" is typical traditional craft in Kyoto. It's very famous in Japan. "Nishijin" is a name of an area in Kyoto. This traditional craft has long history,over 1200 years. This weaving industry has  grown under the influence of Jacquard weaving technique in France,Lyon. The character of "Nishijin Weaving" is, for example, the brilliant coloring. And  we can feel a sense of season from each design. Today Kimono population is dwindling in Japan,but Nishijin Kimono is of high value even now.
Posted by Kumiko at 11:40 PM 2 comments: Links to this post

Kumiko
Nara, Japan
Hi,my name is Kumiko.Very nice to meet you. I'm Japanese.I live in Nara,Japan.I'm married.I have a female cat "Hime". I'm interested in learning foreign language.I am member of English conversation class in Osaka now. I'm interested in politic,too. Nara is good place to sightseeing. This photo is taken at Palais Garnier in Paris. Thank you. 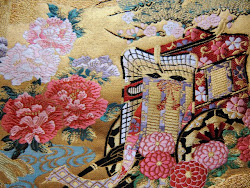